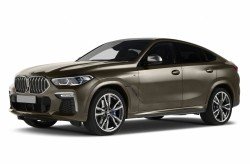 From the point of view of the front exterior, the car with the factory index G06 differs from its predecessor in the F16 body very significantly: it has an enlarged radiator grille with enlarged vertical sipes, and what is most interesting, they can illuminate when the central lock is unlocked, although if desired. The backlight can also turn on with closed doors. Besides, the crossover has a new bumper with enlarged air intakes, LED optics (laser is available for a surcharge, and it shines at 300-500 meters high beam – the same for the new BMW X5 G05), a different hood and side body panels, as well as unpainted linings on the wheel arches. In the M Sport modification, the crossover has a different front bumper with increased air intakes, and the radiator grille, side mouldings, mirrors, and wheels painted in matte black. Speaking of wheels: the standard wheels for the new X6 are R19. For a surcharge, it will be possible to order wheels up to 22 inches.
The car’s rear, the trunk lid has changed, the lights have become narrower, and now they are LED. the shape of the bumper has changed, and the exhaust pipes have increased in size. In the new body, the car reaches 4935 mm in length (+26 mm), 2004 mm in width (+15 mm), and 1696 mm in height (-6 mm). The wheelbase has grown from 2933 to 2975 mm (the BMW X5 G05 has the same ).

The interior of the BMW X6 G06 is almost identical to the X5: the coupe-like crossover has the same 12.3-inch electronic instrument cluster, plus an identical-sized central multimedia system. The front console, deflectors, main tunnel, steering wheel, door cards, multimedia system control washer, automatic transmission selector – we have already seen all this in the new X-fifth. Even the sound has not changed – it is represented by a high-quality 1500-watt Bowers & Wilkins Diamond 20-channel audio system.

The X6 engine lineup is entirely predictable: at the moment, it consists of a turbocharged 3.0-liter “six” B58 with a capacity of 340 hp, a similar volume of a turbodiesel B57 with a total of 265 hp, as well as its 400-horsepower version with four turbines … At the top of the engine, the range is the 4.4-litre N63 bi-turbo engine with 530 hp. All machines work with an 8-speed “automatic” ZF 8HP.

A few words about the chassis: the front suspension based on double wishbones, the rear based on five. In the basic configuration, the car equipped with adaptive shock absorbers, a proprietary M-suspension with active stabilizers is available for a surcharge, as well as a proprietary “pneuma” capable of changing the ground clearance in the range of 80 millimetres. An off-road package is also available, including underbody protection and a limited-slip differential.

Well, where without electronic assistants: the new generation crossover equipped with adaptive cruise control, all kinds of warning and collision avoidance systems, as well as advanced parking sensors.