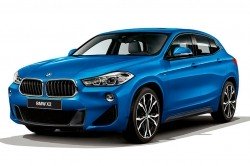 The compact crossover X2 in the BMW model hierarchy will occupy a position between the X1 and X3 models. The length, width, height of the BMW X2 are 4360, 1821 and 1526 mm. Despite the higher positioning, the X2 is shorter and lower than the X1 – by 49 and 69 mm. The wheelbases are the same for the two models. It is not surprising because the two crossovers based on the same UKL platform.

The design of the production BMW X2 is as close as possible to the Concept X2 show car, shown in autumn 2016 in Paris. The negative slope of the grille nostrils recalls classic BMWs from the 70s. The X2 has a shortened front end to maximize the helpful volume of the interior.

The design of the front panel of the new crossover cabin has many things in common with the X1. In the essential equipment, the novelty will equip with a 6.5-inch display of the multimedia system, and for a surcharge, you can get an 8.8-inch screen. The interior of the BMW X2 designed for five people. The boot volume is 470 litres – 35 litres less than that of the X1. The rear sofa folds down in a 40/20/40 ratio.

BMW X2 will offer in front- and all-wheel-drive versions. The cheapest version of the sDrive20i equipped with a 2.0-litre petrol turbo engine with 187 hp. and a torque of 284 Nm. The all-wheel-drive version of the xDrive20d equipped with a turbodiesel of the same volume and power but much higher torque – 407 Nm. At the top of the range will be the X2 xDrive25d modification. It also equipped with a 2.0-litre turbodiesel, but due to the more significant boost, its power reaches 228 hp, and the torque is 459 Nm.

Front-wheel drive modifications of the BMW X2 planned to be equipped by default with a robotic preselective 7-speed gearbox and all-wheel drive – with an 8-speed torque converter “automatic”.

The M-package will offer or fans of sporty style, including 20-inch wheels, a lowered landing, stiffer springs, and shock absorbers.