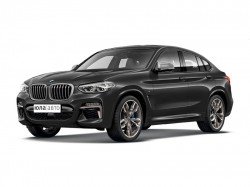 The new BMW X4 (factory code – G02) is noticeably more significant than the model of the outgoing generation: the length is 4752 mm (+81 mm), the width is 1918 mm (+37 mm). The wheelbase has increased by 54 mm and now measures 2864 mm, which promises more space in the cabin. The design of the BMW X4 has evolved significantly with the change of generations:

All lighting equipment based on LED elements. The radiator grille equipped with automatic shutters (this improves aerodynamics). The salon is made in a typical BMW style, in which the main thing is the convenience of the driver’s workplace. The main innovation here is a multimedia system that can operate without touching the display as it recognizes gestures.

The engine range of the new model includes six modifications. These are three petrol versions equipped with 183 kW / 249 hp four-cylinder engines. (xDrive30i) and 135 kW / 184 hp (xDrive20i) or the X4 M40i six-cylinder in-line petrol engine, which develops 265 kW / 360 hp. Three diesel engines are also available: the X4 xDrive20d with a four-cylinder unit developing 140 kW / 190 hp, the X4 xDrive30d with a six-cylinder diesel engine that produces 183 kW / 249 hp for this version. And a modification of the X4 M40d is also equipped with an in-line six-cylinder diesel unit that develops 326 hp.

All engines aggregated with no alternative to an 8-speed automatic transmission Steptronic with the possibility of manual shifting using paddle shifters. The BMW X4 equipped with xDrive all-wheel drive as standard.

According to BMW’s press service, the company’s engineers have significantly lightened the design of the X4 chassis. Therefore, despite the increased dimensions, the model’s curb weight has decreased by 50 kg relative to the outgoing generation crossover. The aerodynamics of the car are also significantly improved – the drag coefficient is 0.30. The new model equipped as standard with Variable Sport Steering integral active steering, Adaptive M suspension, M Sport brakes and M Sport differential is available as options.